Week in Review and Runniversary

This past week has been a full week of training. I'm exhausted but mostly happy with how the week went.

I did the first strength workout that Drill Sergeant has designed for me. He's been letting me use my own favorite workouts but this week he replaced one of mine with one he designed for me.  I really liked it.  It gave me a chance to see that I was a little stronger than I thought. The workout had a few sets and push ups are part of each set. I've never been able to do them but I've been working on them in my other workouts.  I always do them on my knees but Tuesday I decided to try at least a few off my knees. I did 3-4 of each set that way, till I hit the last set.  I was able to do ALL 10 off my knees. I didn't do them fast but I did them.  That was probably the high point of my training week.

I also had my second timed mile last week.  It was rough. My leg cramped on me, I couldn't get my breathing under control, my splits weren't want I wanted them to be and I just felt like I was running through mud. I wanted to just give it up, tell Drill Sergeant that I need to do it a different day, a different week. I wanted to just skip the rest of the workout. But I kept running. I had to break each lap down into 100m just to keep moving. I wanted a 7:30 mile. I could taste it. I could feel it searing my lungs as I ran.  I missed it by 25 seconds. There may have even been some tears! I went out too fast in the first lap and I wasn't able to make up for it. D.S. says I'll learn to pace myself. I feel like I never will get it. I'm always too fast when I start out and I know it's going to really mess up my upcoming races if I don't get it under control.

Last week D.S. also added in pull-up/chin-ups. They could be really discouraging if I let them. They kicked my butt. However, that's why I'm doing them because my upper body strength is really lacking. After the workout I'm supposed to do a hang and time it. It's an indication of my grip strength. I only did three of those workouts this week but I went from 44.25 seconds to 1:10 hanging.  The 1:10 was brutal. I felt like my arms were going to rip out of their sockets and my hands cramped up. I thought for sure that my hands would stay in the grip position forever but I was determined to break a minute and once I did, I needed to see how much longer I could hold it.

I had my first hill repeat workout last week. I knew they would be challenging. What I didn't expect was how much I was going to love them.  I picked a hill that is .10 of a mile, it's only about 50 feet of elevation gain but it made my lungs burn. I'm grateful that D.S. encouraged me to try running without my heart rate monitor because it felt like my heart was going to explode and I might have stopped if the numbers were too high. Then right after they were done, I was supposed to get into race pace as fast as I could. I ran back three miles to where I'd parked and the 1st mile was really hard because a lot of that was uphill still. By the time I got to my car, I'd run the three miles with negative splits and was pretty exhausted.  I sent D.S. a text telling him he was fired and I was getting a coach that didn't believe in hill repeats!! In reality, I was hurting but I was reveling in the pain, knowing it was taking me closer to my goals.

My long run this week was a train wreck for me emotionally.  The actual run part wasn't horrible. I kept a good pace for 5 miles. But I cut my run short due to the heat and that I got sick in mile 5, twice.  In my previous running life I would have called my husband to come get me.  This time, in tears, I walked the 3 mile back to my car, even after his offer to come pick me up.  I just needed that alone time to process some stuff, to go over my run and to just sulk.

The emotional aspects of my long run was because my husband and I were talking about the anniversary of when I started running again, which is tomorrow, July 15th. That day is seared in my memory. It was a day I took some control of my life back.  You can read about it here: Running From Myself.

I still feel like I did then. There's a different determination to my running. I'm still trying to figure out just what I can do, how fast I can go, how far I can go.  That's the story behind my newest tattoo. I just don't know what my boundaries are but I'm willing to keep pushing on that line and see how far I can go. 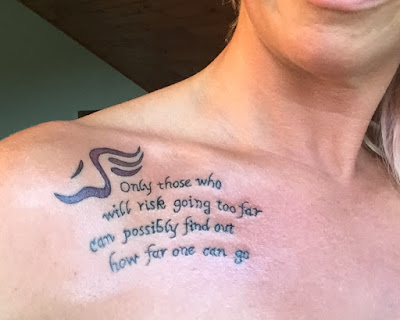 Thursday will be my first 5k of the year. I ran this one last year in August. They've moved it up a month because of upcoming construction in the park that it's run in.  Last year I ran it in 32:11, that was a 5k PR for me. I have a very specific goal this year but I've become a bit superstitious about sharing my goals before a race. I'm more than willing to share it after the fact, whether I achieve it or not.  I believe in the training I've been getting, I believe when D.S. says I can do this, I believe in the encouragement and support of my husband, who has seen my running transition over the years.    I'm really looking forward to being able to post a new PR on Thursday night.