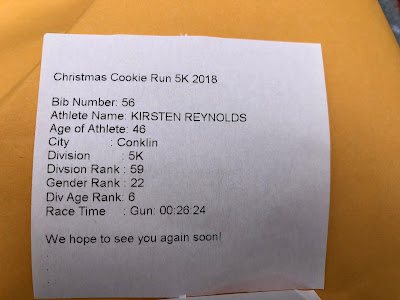 Sometimes numbers don't tell the whole story. This was the best time in a 5k I had this year.

But this was the hardest 5k I've had this year. I had splits in my mind that were on the edge of what I was capable of but not hitting them is not what is bothering me.

We got to the race and as we were walking to the bib pickup, my hip flexor had a slight painful catch to it. Seriously, I tend to ignore any prerace tweats of pain because my brain likes to play tricks with me. I've had some pain before races that was pretty intense and then it just disappears. I read an article once that our brains basically freak out on us when it knows that we are going to face a intense race or workout. (I wish I'd saved the article but there are actually lots out there if you just google it). For the record, I don't ignore pain that doesn't go away!

So I felt this tweak and I vaguely remembered slipping this week and feeling a pull in my hip flexor. And then it was gone till my warmup. I ran very easy but felt that same pull. It was gone before I finished my warm up and I assumed it's just because everything is so tight right now. I still haven't fully gotten back into a pattern for yoga and strength.

I started the race way too fast, I looked down and I was doing a 7:30ish pace. I can do that on a track but in a race that's way too fast. It was an effort to slow down, especially as My Musician passed me. He was doing intervals though, hard :50 and easy :25 or something like that.  I kept telling myself, run your race. Run your race.  I finally eased into a pace that was comfortable and my breath wasn't overly labored.

I felt great.  My last two 5k's (Sept & Oct) have been races I started conservative and they left it all out there in the second half. I felt this was going to be another one of those races. I knew if I kept feeling this relaxed at an 8:20ish pace, that I'd be able to pick it up even more as I progressed. The weather was also perfect. 38-40 degrees. I was in shorts, t-shirt with my arm warmers. I was just so comfortable.

Mile 1 was faster than I planned, 8:22 (that was my mile 2 goal) but I was still feeling really comfortable.  Hit the turn around, still feeling really good. This race is FLAT and out and back. It's at a local paved trail. The extreme flat for 3 miles is a bit harder, though, than if there was up and down of hills. I think that's part of what caused some issues with my hip???

I saw My Musician shortly after the turn around. He was about a quarter mile from it still.  My pace was still on track and I think I was picking up the speed a bit. Then suddenly, right around 1.80 miles, the pain in my hip flexor was so bad I almost stopped right there. Runners, I had passed, went flying by me because I slowed down more than I realized.  I push hard to finish the mile near the 1st one, 8:24.

I almost stopped 3 or 4 times in the last mile. The pain was not going away. I kept running, mostly because I knew the faster I got to the finish line, the faster this would be over. I had to scrunch my body up a little bit to run with minimal pain. I hate modifying how I'm running to compensate for something.

I was so discouraged by how I felt. This mile was 8:36. Still a respectable time but not the time I knew I could do. I was so glad when I crossed that finish line. Of course, I've not had a single second of pain since the end of the race.

My disappointment in the race is mostly because it really could have been avoided. I missed my chiropractor appt this week because I was stuck at work late. I didn't stretch as much or as well this week as I should have. I was so frustrated that I couldn't get my legs to move as fast as I was willing them to move. It will all come in time but I know I had it in me yesterday.

I know the race time is a really good time but that doesn't change the fact that it was a disappointment to me. I didn't hit my goal. I wasn't able to run to my ability and I had issues that could have been avoided.  Lessons learned. I had to allow myself to wallow a bit yesterday and now today I can celebrate a race well run under the circumstances. 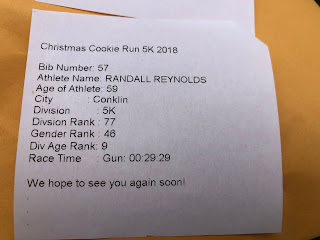 Now the real celebration was that My Musician had his 2nd Sub30 this year! He hasn't been running as much but he killed it yesterday. His time was at 3 minutes faster then what he thought he might do. I'm so proud of how hard and how well he raced yesterday.  I am sad I missed getting his finished. He was still about a tenth of a mile out and I had a clear shot of him finishing but when I hit record on my phone, it never started. I did get a picture of him telling me he needed a moment!!

Until this week, my runs since the Philadelphia Marathon have been all easy paced.  This week I finally have speed work back in again. 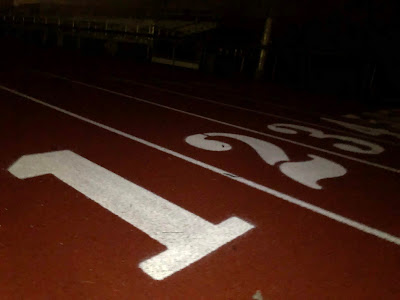 On a personal and non running note, I'm am working on getting my Personal Trainer certification to go with my RRCA Cert. I am really missing working with others on their goals.  More to come on that, much later.