In the last week, I've run two races.  A one mile race and a 4 mile race.  First though, let me start with a weight update. 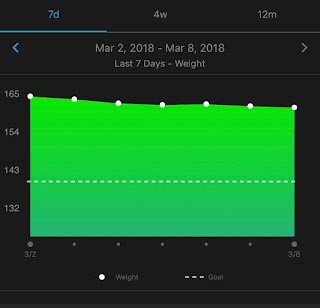 I'm cautiously optimistic about my weight loss.  2.6 lbs this week.  I actually feel like I'm eating a ton though.  I've dramatically increased my protein intake. I'm also watching the about of fat per serving and the types of carbs I'm eating. Thanks to my friend Prof Badass, I took a good look at what I'm eating. I hate using MFP, I prefer a paper log, but I have been logging there just to get realistic look at where my numbers are. I've been really shocked. Foods I thought would be healthy for me were shockingly high in calories or fat.

I have a huge sweet tooth so that's been another place of struggle for me. I'm trying to find better ways to get a bit of sweet, like a grapefruit with a touch of brown sugar. Yum.

I'll keep you updated as I progress.

On Friday we got 19 inches of snow.


Parade Day
is a big deal in Binghamton,
so the race and parade must go on! 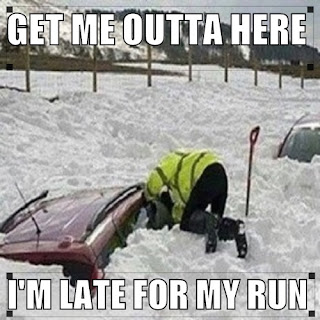 I had seen on the weather channel what the road we'd be racing on looked like on Friday. I was pretty skeptical they'd be ready.  When I went into town on Saturday morning to pick up my bib, I was happily surprised that the roads were fairly clear.


When I'm not in the mindset that I'm going to race hard, I tend to be overly lax about about getting ready.  This was no different.  I had hoped to get a 2 mile warm up done but we were plowing still and My Musician was helping the neighbor plow.

At 11:50 I called him at the neighbors to let him know we had 20 minute till we left. He informs me he's stuck and might have to meet me there. Ok, I can handle that. I begin to look for the running pants I want and they are no where to be found. No a bit of panic is setting in.  I really should have done what I always do and laid it all out the night before. It took me forever to find what I needed and by then he was back and the three of us were able to leave, but I'd run out of time to have a good warm up.

I had him park at the finish line and I ran to the start line. I had 14 minutes before the start. My warmup was faster than I would have liked. On the way to the start line, I ran past both the male and female elite heats. They were just flying up the race course. I so had some ultra-helpful-standard-parade-day-drunk slur at me that I was running the wrong way. Thanks buddy for the info!

I ran the mile there in 9:34. Dang it too fast. Just enough time to stretch out the leg that's been giving me fits. There didn't seem to be as many people this year so I was able to easily find Hill Dynamo and Superman. 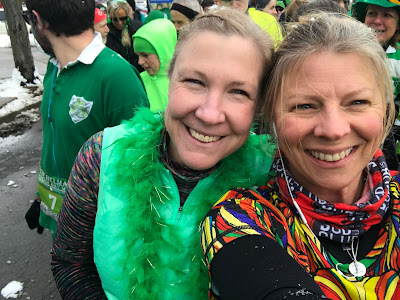 Then we were off.  I started way too fast. I don't typically let myself get swept up in the run because I know how much energy it takes from me.  I looked at my watch and I was outright sprinting. There's no way I could keep up that pace for even 200 meters.

The wind was right in our face. 16 mph winds. I have a very tough time breathing even when it's light cold winds so this really made my lungs hurt.

The mile is mostly a slow incline the whole way.  Right before we crossed the Court Street bridge, I was passed by some dude running in a Dino head. Really? I could barely breathe than he ran by my like he was on a causal run! Sometimes that would motivate me but this time it took a bit of wind out of my sails. 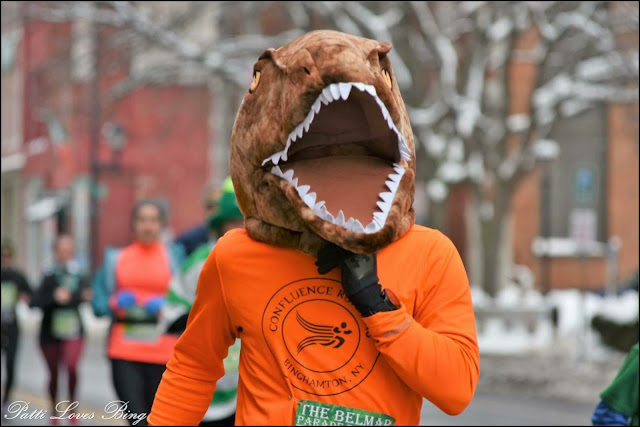 Randy predicted I'd run a 8:38. I came in at 8:45. I'm basically ok with that. I know I could run it faster but I also know that each day and each race is different. For that day, that's what I was able to do. The finish line is a big party. Free beer and everyone hanging out around the Belmar Pub. I don't drink beer so we didn't stick around long after the race. It was so cold and I didn't dress for the temps.

The bling is a bead necklace and a really nice pint glass.  I was surprised to look at the results later and see I'd placed 2nd in my AG and a 47 second PR!  This is my second year running this one. I'm sure it's going on my calendar as a yearly race.


"I just run better
with music drowning
out my screaming brain
and labored breathing. "

This is also the second year I ran this race. I love this one. The course is challenging for early season running (aka: not yet back to training hills).

One of the women I work with was running this too. She was telling me about another woman at our company also running it. Then when I was looking up last year's time on Friday night, that other woman, finished right before me last year! Small world.

The weather wasn't as bad as last year. The temps were about 15 degree warmer but the wind was about the same. I didn't think I had overdressed but I found out part way though that I certainly did!

I broke the Sharpie out for this race. I wrote my projected splits on my hand since that always helps me to stay on track. Of course I had to add my hashtag #BeTheLion and the hashtag from Fatman Chronicles and the Neon Runner's words "It's going to hurt", they all inspire me. 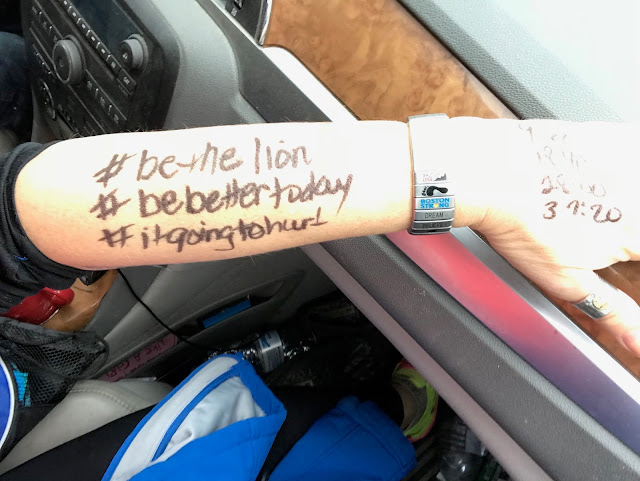 The day didn't start well though. I woke not feeling good. I spent way to much time running to the bathroom. At the time I attributed it to nerves but after a weekend of not feeling well, I'm pretty sure it's a bug I have. We had to stop at McDonalds on the way to the race so I could use the bathroom again. Geez. Tinkerbell grabbed pancakes while there and they were so slow, it made us laster than we already were.

I got to the start line with just enough time to run a half mile warmup, quick port-a-potta stop and met them at the start line. Once the race started, I couldn't find them on the side where they always stand. Oh, there they are!!  I always make sure My Musician can find me! 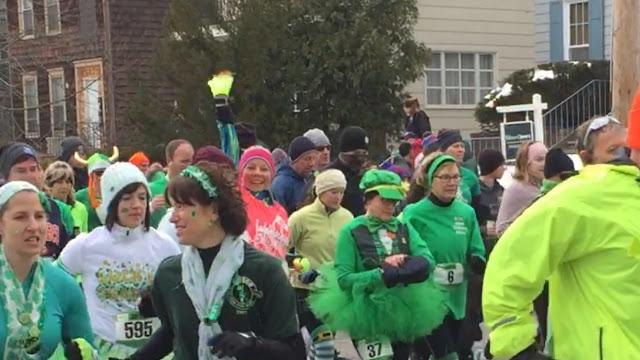 Mile 1 - Wasn't too bad. A little faster than I projected but the pace kept going up and down because there were so many people. I popped my headphones in and turned up my music. I didn't want to hear my brain today. I just run better with music drowning out my screaming brain and labored breathing. I feel bad for people around me who have to listen to my extremely noisy breathing! 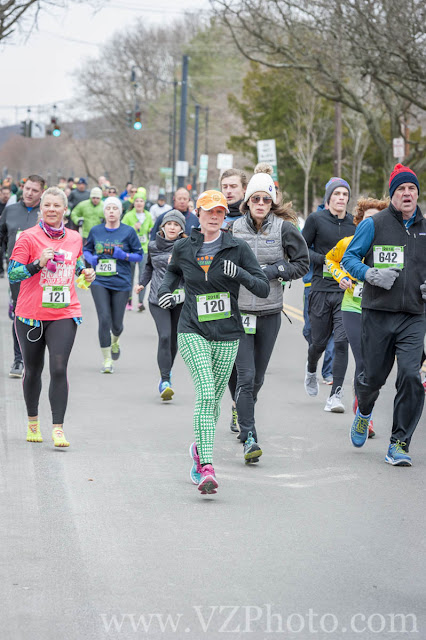 Mile 2 - As we turned to run over the bridge on Riverside Drive, I began to look for Tinkerbell and My Musician. I had already stripped off my ear warmers and gloves. They were no where to be found, although maybe I missed them. The pot holes this time of year are bad and I spent a lot of the race watching where my feet were going. The small little "hills" were so hard. I need to start spending some time on hills again.  This mile had my HR really high and my breathing was really difficult. This was my slowest mile.

Mile 3 - Is the turn on Beethoven. By this time, I was overheating with the wind to my back. As we started running up the hill, I stripped off my coat that I was wearing under my shirt. I was pretty sure that I'd fall on my face with my arms all bound up in my coat and shirt.

This mile had a guy that scared me a bit. As we were nearing Seminary Ave, I could see by his body language out his car window, that I wanted to remove my headphones and hear him. He was yelling at the young volunteer trying to control traffic. He was yelling at her asking, "Can I just go now? Can I?" and he was toeing his gas pedal. I seriously thought he was going to just drive through us runners to get out.  There was barely a break in the runner right behind me and he yelled at her that he was just going to go now and bolted onto the race course.  I really wish my phones camera wasn't broken, because I would have tired to capture his plate to run him in. I hope someone got it! I felt really bad for the volunteer. 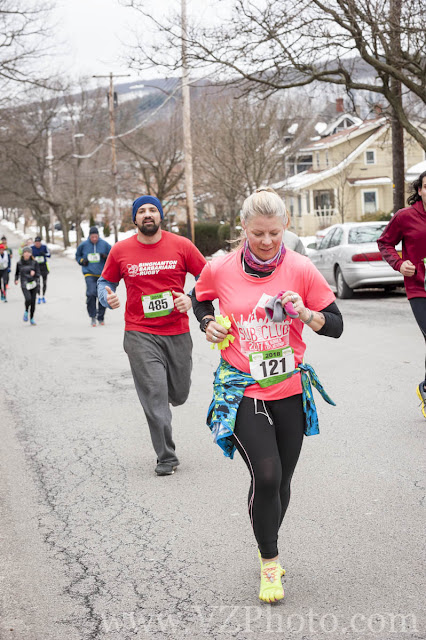 That mile actually feels the hardest but the "shortest" of them all. You ever have a mile that felt like it was 4 miles long? This mile felt more like a half mile.

Mile 4 - The last mile starts as we turn off of Beethoven onto to Main Street. This is where I start grinning because I know I can make up some time on this slight downhill before the last big hill.  I dropped one of my dollar store gloves. For a split second I almost stopped but kept going. Then this nice guy comes running up from behind me to give it to me.

The last hurdle is the slow uphill of Chestnut St.  Strava.com says parts of it is a 5% grade but it really isn't a bad hill.  I'm just tired at that point and want it over. I was really struggling up it when I looked up and at the hill across the river.  One of my Sub 30 friends had gotten a tattoo the day before. It's of 4 pine trees, a personal representation for her.  Well, there they were. Looking down over me. It gave me such a boost. It reminded me of her strength and the strength of all the strong women I surround myself with and I'm honored to know.

As we got to the top, this woman I'd been leapfrogging with, came up next to me. I looked over and told her great job on the hill and she said the same to me.  We ran side by side around the turn and down the last .40 of the race. I was very dizzy and my vision went a little shaded a couple times here because I really started to push my pace. I heard her say something about the finish line has to be close but she sounded very far way and there was no way I could respond right then.  I slowed just a touch. Only two other races have I ever felt like I was going to pass out. I was definitely feeling that as I could see the finish line. She had pulled ahead of me a little and I was trying to catch up and pass her. A lesson from my first coach has always stuck with me "Pick someone in front of you and reel them in, pass them and keep them behind you". I just didn't have enough left right then to do that.

Take a look at her number as she's crossing the finish line right before me!

So the world being small that mentioned earlier....yeah, it got even smaller. This is the woman who works at the same company as me! She finished right before me last year too.

Final gun time 37:02. I'm thrilled with it because I was planning a bit slower race.  I had a 37 second PR with this one.

This race is definitely on my yearly radar. Although, I really love all our local races.