This was a one mile race so not a lot of recap to offer for it.


The star of the day was the cold.

I had every intention of running this race as hard as I could.  I had been having pain in my left glute and hamstring all week but I knew with a good warm up I'd be ok. Then these temps hit. We had been running in shorts and tee's the week before so I was not mentally prepared for the temps to bottom out.  My friend, Hill Dynamo and Superman were running the race and I decided to just have fun with them. 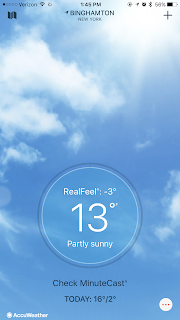 I rode to the race with her and her family. My Musician and Tink stayed home, she had the flu. Hill Dynamo's hubs dropped us off at the finish line. The sun was out and it didn't feel too bad. That was until we got away from the shelter of the building where we parked.  The wind was so cold in our face.  In felt like it was blowing right through all my layers.

I love this woman....as we were walking to the road to run a warmup to the start line, we were both trying to get GPS devises up and running. I was trying to be discreet with it. I'm a crazy runner with my own little quirks, rituals and superstitions. I am obsessive and like to have every step counted and credited.
It was hysterical when I looked back at her and said,

"Yep, just turning this on. Gotta get credit for the miles!"

Perfect. It's why we run together, she is just as crazy and obsessive as me.


He was such a trooper in the cold. We let him set the pace for the warm up. That kid has some legs on him, he kept us moving, the whole mile, at a good pace.

The start line was by the library so we got to go inside, us the bathroom and stay a bit warmer.  I was sweaty from the warmup and didn't want to get over heated and it was so crowded in there that we decided to try outside instead. I hugged the building though to stay out of the wind. Superman was walking around enjoying the sights and sounds of the pre-race atmosphere.  The elite runners started the race before the main crowd. We got to see them off. I couldn't believe how little clothing they had on. I realize they are racing the mile at crazy fast speeds but I think I would have been frozen in place before the gun went off! 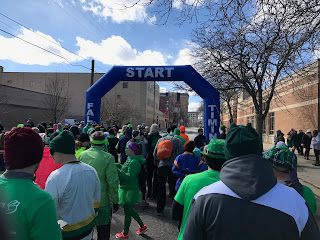 Not a whole lot to say about the race. It's a straight shot up Main Street. The whole thing is pretty much an uphill incline. Superman did really good for being as young as he is and for as cold as it was.  Only once he lost his footing and down he went. Kids are great though, he got up and just kept going like nothing happened.  He was tired but he kept going. The wind must has sifted or something because it was in our face the entire race. The cold made it really hard to breath and I had to work to make sure I was getting enough air in.

When we hit the last quarter mile, I zipped ahead to get a video of them crossing the finish line. Hill Dynamo and Superman came across hand in hand. I loved seeing that. We didn't stick around to enjoy the after race feeling or see what our times were (my Garmin wasn't right because I forgot to stop it).  It was just too cold plus her hubs and Little C had been standing in the cold waiting to see them cross the finish line.


The race itself was nice. If only they could have provided better weather! Guess that's why we train year round, to always be ready for whatever weather we are handed on race day.  I will probably run this one again next year. It was a fun start to kick off the spring/summer racing schedule and this was race one of the ERRS races.

By default it's a PR since I've never done a mile road race. I am determined though to find one later in the season. I know what my PR mile is for my timed mile and I'd like to get near that in a race this year.