My training weeks run Monday to Sunday. I posted late last week so last week's long run is getting incorporated into this week too.


From the first step out my door this run was difficult. My legs felt heavy and I was tired. The weather really plays a huge role for me. I like the temps hot and the sun shining.  It was chilly and cloudy and there was a threat of thunderstorms. I said it before, long runs are my weakness. I can't decide if it's mental or if there really is a barrier for me as the runs get up in distance.  I look back at last year and I only have one run, over 14 miles, that I would call successful.

Last weekend I didn't run my LR with music so I wanted to try it again. I feel like the run goes faster without music. I typically train (my easy runs) with music but I rarely race or do speed workouts with it. Something about it, when I'm trying to run faster, annoys me.

In May, I started transitioning to sneakers for my longer runs because of the big toe joint that caused me so much pain after my Bridge Run (yes, race recap will eventually be coming) and I've actually done the majority of my runs since then in the sneakers instead of Vibrams.  Near the end of mile 4, I almost called My Musician to come get me because that toe was hurting so much. I've discovered how easily my mind can get my body to freak out. If I can find a way to run through the pain, for a short period, it will typically go away. When it doesn't, then I know it's a legitimate pain and not my mind panicking about the upcoming workout! The toe was really aching so I curled my toe and tried to ignore it. Then at the beginning of mile 5, as I was gasping up a hill, a bug decided to fly in my mouth, I bent over coughing and choking, I thew up and peed but the plus side was that in that moment and for the rest of the run, my toe no longer hurt. 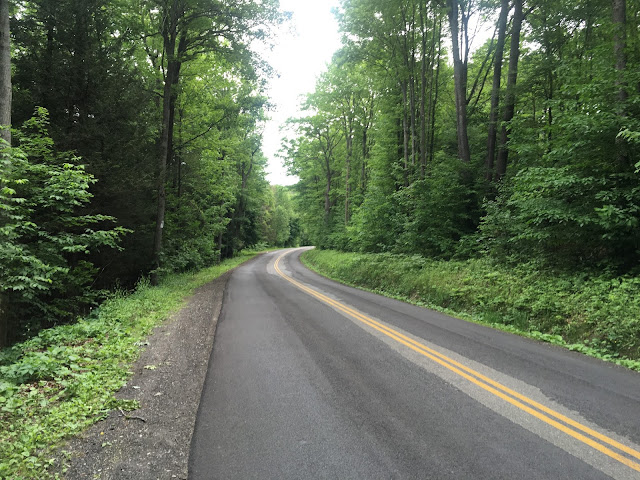 As I was running on this very rural road, I had an eerie sense of just how secluded I was. There was no houses around, hadn't been for awhile and I had zero cell service.  Not a quarter mile later, as I was nearing the end of the road, a truck turned on to the road and pulled over. I'm sure it was totally innocent but it really creeped me out. Thankfully I was back in cell service, pulled my phone out and called My Musician.  The truck then drove away. I do use RoadID but it was nice to hear his voice, even for the few minutes we chatted, gave me a since of security.

It's amazing how 3 hours of my life can be focused down to the simple act of trying to breath well and putting one foot in front of the others as I struggle up a hill.

Fueled with the Huma at 6.5 miles and the Huma+ at 10.7.  I tried the Huma+ during my marathon relay and really liked it.  I miss using the chia seed pancakes for fueling but it's just so hard for me to run faster, chew and breath so I've gone back to just using the Huma.

Tuesday track. I was so tired. I didn't get much sleep and I turned my alarm off, not wanting to get up. Thankfully I was supposed to meet a friend so that forced me out of bed. She wasn't able to make it, due to an injury, but I was grateful we had the plan so I was up and ready to head out. Then the awesome ladies in my FB messenger group made sure I kept my butt moving out the door.

Over the winter I put the weight back on that I lost and it's really effecting my speed and after my warmup and first 400, I got annoyed at how my breathing felt.  I threw my planned workout out the window and decided to work on 400's for the next few weeks because I know how well they work to help me with my breathing. In a few weeks I'll get back into my marathon track workouts.


I didn't actually end up doing a tempo run per se but I ran with my Speedie Friend so it was definitely an effort workout.  She set the pace and I just tired to keep up. Looking at the splits afterwards, I was really impressed by her pacing.

It felt great to push myself. It was harder than the same pace was for me last year. It really accentuated just how out of shape I am right now, from where I was and want to be again. I got very dizzy at the end but I've felt that before in 5k's and some hard training runs. It's not a feeling I like but it's also not one that worries me.

Just an easy 5 miles. I wanted to do more but I was feeling the effects of the last couple days and I wanted to just give my legs a bit of a rest.

Today was a schedule run day but I decided to give myself a day off. I have a really busy weekend with family and I have a race tomorrow.

Tomorrow is a race that I ran for the first time last year, Vestal XX (it's a 20k).  Of course I'm totally second guessing myself and my ability to run this race.  A race report will be coming, I have to write the other two I haven't yet done first though!