Training Updates and Race Review - The Running of the Bears 5k

I haven't updated in awhile. There's not a lot to update but I like to have this as a log for myself, too. I'm terrible with writing down anything about how I feel during training or a race, it all goes here or it's lost forever.  My training has really suffered this winter and we had a mild winter! It's very frustrating to me that I allowed myself to hide curled up under my blanket all winter instead of out doing what needs to be done. I'll fully feel that lack of training commitment in my marathon in just over a month.  I have a half marathon coming up and even that I don't feel as prepared for as last year and last year I had less miles going into the same race. I know some of my mental issue is that I'm comparing myself to my PR half last September and I'm just not in that shape.  I'm also a bit bummed that I realized that for my full at the end of May, I just have to treat it like a really long run and go easy at it. I don't want to completely destroy my legs so that I can really spend the 18 weeks after that just getting ready for the Wineglass Marathon.

I haven't run a 5k since October when I paced My Musician to his sub 30 5k.  It's one of my favorite distances, well really anything but the marathon is a favorite, but I love the 5k because I push myself to where I think I'm dying and can still be smiling when it's over.

I woke up Saturday, April 2, really relaxed. I didn't even have my race gear set out. I picked out gear I've run races in before and grabbed my sharpie. That day I chose #embracethesuck, instead of my favorite inspiration #itsgoingtohurt (reminds me that if I want to reach the goals I have set for myself that pushing my limits is going to hurt sometimes). 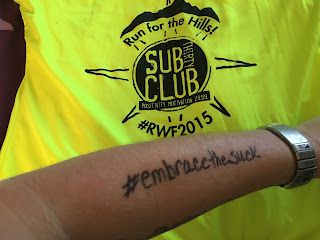 I was taking this race really casual until we walked out the door. Then the anxiety hit me. I acutally love pre-race jitters because they get me focused on the task ahead. It took us about 30 minutes to get to the school the race was at. It was raining at home but just cold, windy and cloudy when we got to the school. I was a bit calmer by the time we got there though. First order of business was getting my bib and then finding the bathroom! Then I got a mile warm up in. I was freezing and the warm up didn't help.

I made the last minute decision that I was running with my Sub 30 sweatshirt on. I just couldn't stop shivering. So we lined up, the race started and beginning is downhill until you get over to Front Street and then it levels off a bit.  I didn't know how much that uphill at the end was going to effect my finish....

The race itself was fun. Not a lot of spectators but the runners were cheering on the walkers that had started earlier, and vice versa. This race was a run/walk to support and raise awareness of Prader-Willi Syndrome. You can read more about it here, on the race's website.

Less than a mile in the clouds just totally disappeared and the sun came out in full force. I really tried to ignore how hot I was getting but after the halfway point I couldn't do it any longer. This isn't a chipped race so they have to be able to see your bib at the end. I ran through ways to take off my sweatshirt but still have my bib available to them at the end. I knew I'd be running hard at the end and I didn't want to take the effort to hold my bib up. Finally on one of the downhills before it leveled back off, I decided to take my bib off my sweatshirt and pin it to my t-shirt. That was an interesting task to say the least!

Then I dug in to pick off runners.  Because I know my pace isn't what it should be, I really didn't know what I had to give but I started to push my pace. It was fun running past a handful of runners. No matter how much it hurts, I love pushing myself in a 5k and trying to catch up to and run past those in front of me. As we started to go up the 1st hill at the end, I felt my pace slow, a lot!  As we crossed the last road and back onto the school property, I heard someone coming behind me.  I dug in and really pushed it up the hill. There was no way I was giving up first. I really picked it up and was surprised to see I was doing close to a 7 minute pace up that hill. It's not a huge hill but I've not trained on any hills in 4 months so even that small one felt harder to me.  I could still hear her on my heels and as we rounded the corner she passed me. I looked later, she's 21 years younger than me, so I didn't feel as bad about her running me down! 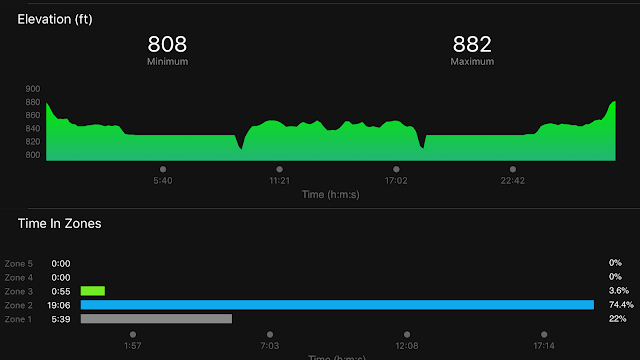 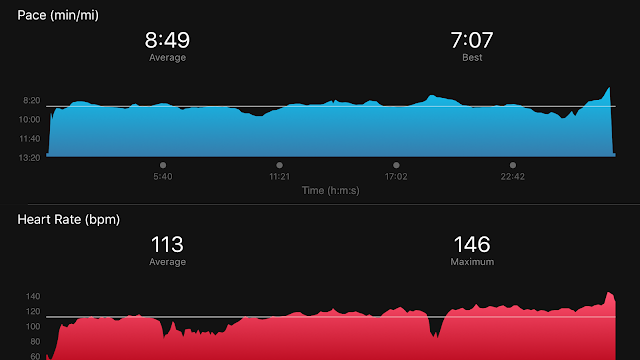 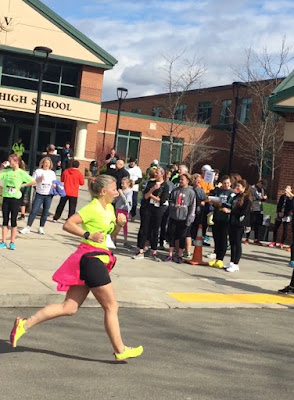 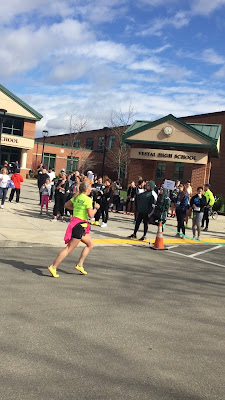 My Musician said I look the same running if I'm
running a 10 minute mile or an 8 minute mile. 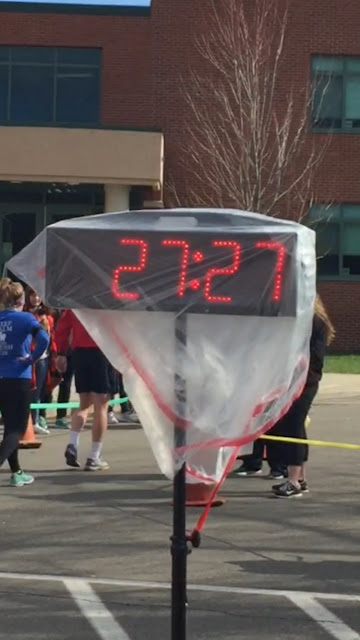 I was pretty surprised after the race to see how low my HR stayed. I do not do HR training but I am aware of where it normally sits when racing and this was much lower than it should have been. It does show me that I didn't run as fast as I should have but it's been harder hitting my 5k pace with the weight I've put on.

This was the first race I've run where I had to fight not to throw up at the end.  Because they have to rip a piece off of our bibs at the end, we came to a dead stop, which I never do. After I got through the line, I felt so sick that I had to walk around a bit, away from everyone, till I knew my stomach was going to stay put.

I've had slower 5k's and faster 5k's but for that day, 27:27 was what I had in me.  I'm already looking forward to my next one. I received a surprised email later in the day, I placed 2nd in my age group.  I got a cute little certificate and a gift cert to a local restaurant.