I like to do week in review when I'm training but January wasn't really a training month. It was more of survival month.  We had a pretty mild January but anyone who has ever spoken to me for more than 5 minutes, from December to at least the end of February, knows I hate winter. Even a mild winter (as much as I appreciate it) is still winter. If it's not 80 degrees outside, I'm cold.

I've been battling congestion, a cold and general ill feeling. My family has been in the same boat.  I know I'm whining but it's so hard to get up and moving when it's dark and cold plus feeling like crud.

I think of all the runs I did, one stands out as a really rough one.  It was in the teens and had snowed the night before. I wear Vibrams, which really lend zero protection from the cold.  I wore my trail ones to try to give myself a bit of traction in any snow I might encounter.

It was in the teens my toes felt like frozen little sausages on my feet after about 5 minutes of running.  It took almost 3 miles before my toes stopped hurting. That typically only happens on runs that are below 20 degrees.

By the time I was done, my feet were soaked and I was ready to take the rest of the winter off.  After I ran Big Sur in 2010, I told myself that I'd never run another spring marathon since it meant having to train in the winter months. Then again, I told myself after Philly last year that I wasn't going to run any more marathons. I just keep lying to myself because not only am I running a spring marathon this year, I'm also running a fall one!


I've missed more runs on my scheduled than I care to admit.  I signed up for the January Freeze series our local running group hosts each year.  It's a 10k, four Saturdays in a row.  I made it to the first two. I had a lot of fun and Tink cheered and sang for all the runners. 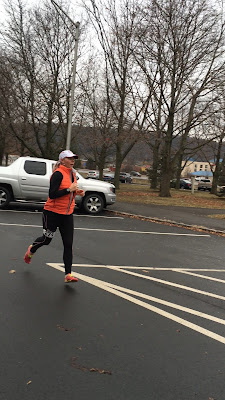 Other than a couple really good runs, it's been a month of just getting miles in to keep my base up.  I had a few new gear purchases this month too.  I got the Garmin 235. If you want a in-depth look at it, go to DC Rainmakers blog.  My Musician gave me the choice of this or the Apple watch.  I am an Apple junkie but I trust the Garmin more as an activity tracker. I enjoy having it track my steps and remind me to move. This time of year my movements are extremes. I'm either sitting and drawing or I'm running. Not much in-between for me. This is helping me to remember to move. I like how it monitors my HR too. I don't think it's totally accurate but it's close enough for what I use it for.

I also bought a "tent" that is sold to protect spectators at sporting events. We got it so that Tink can sit at the track with us, regardless of the weather and be out of the elements.  Now that we don't have someone at home to watch her, we have to get creative to run together.  I got the R3 roller because the foot I sprained feels like it's trying to develop PF.  I'm wearing My Musicians Strassburg sock, doing extra stretching and using this roller and the combo seems to be helping.

And last but definitely not least, new Vibrams.  I have waited over a year for the yellow color to be back in stock. I don't need a new pair yet but they were on sale and in stock. Perfect shoe storm. 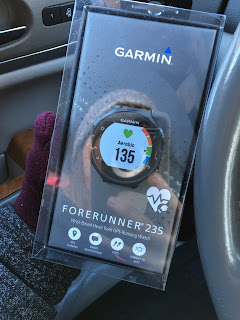 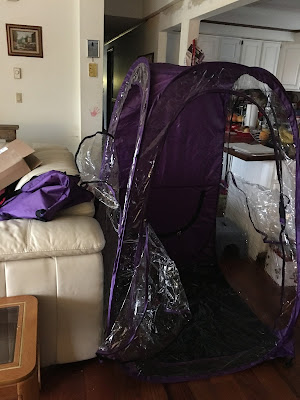 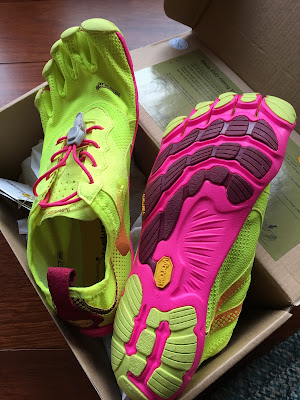 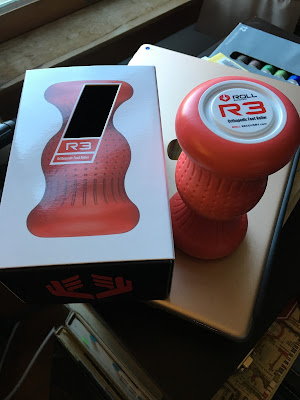 I'm looking forward to what this spring has in store for me and for us.  We are considering a running bible study at our church and we have our RRCA Coach Certification coming up. We're working hard on getting the coaching business together and I'm thrilled with the name we've chosen.  Running wise, February is all about continuing to build the base to put my marathon miles on!!