**sorry in advance, there are a lot of pictures. It was a mini runcation for us too, not just a race ~ scroll to near the end for the race recap**


It's been about two months and I still don't think I've fully processed my marathon and all the emotions attached.

This was my second marathon.  My first was in 2010.  It took me 5-1/2 years before I was ready to run another one, even then I'm not sure I was really ready for this one.

It was an emotional weekend all around.  We spent Friday, Saturday and Sunday visiting Philly for the first time.  It's a beautiful city. Officially my second favorite city after Boston.  I love the historic cities. 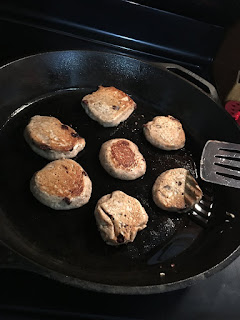 Thursday night I made chia seed pancakes. I have come to love them for my fuel. They are natural, healthy and give me lots of energy! I'm so grateful to my friend, TW, for introducing me to these!

Friday morning, we put Tink on the bus, finished packing and hit the road.

When we got to the hotel I asked if we could have a room high up, overlooking 17th street.  Boy, did she deliver an amazing room for us!! (Don't worry, if you miss this picture, I have lots more coming of this view!!) 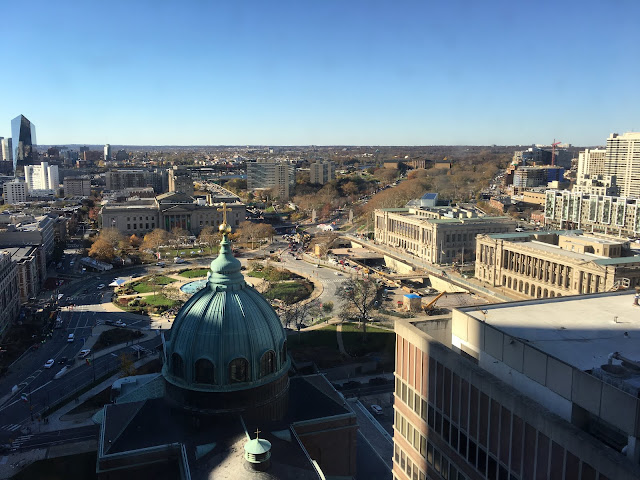 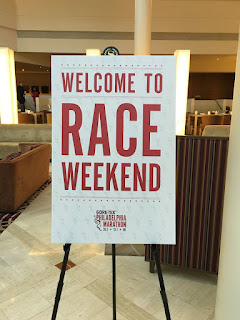 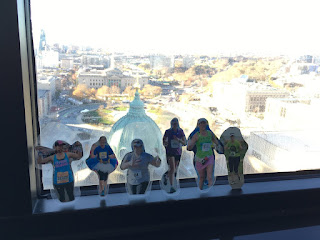 Friday night, we went to the expo to pick up my bib and then we decided to wander around Philly. It's such a beautiful city

There's a little Italian restaurant, Rex's Pizza, on the corner here that had delicious Philly steak and cheese sandwiches.  I can't eat gluten, it makes my joints swell, and I feel like I have the flu for a couple days but for a bite of My Musician's sandwich, I took that risk. There was a homeless guy sleeping right next to the place and he said their sandwiches were "off the hook". (I got a baked potato with cheese and bacon. That wasn't very good) Come to find out, they give this guy food when he comes in!! It really makes me so sad to see homeless people. My Musician offered him his Dunkin Donuts muffin he'd picked up to have the next day because the guy didn't seem to get sweets very often.  He was so grateful for something we take for granted. 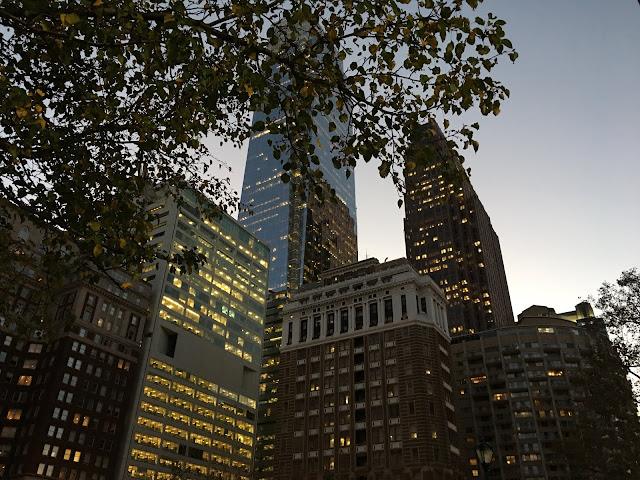 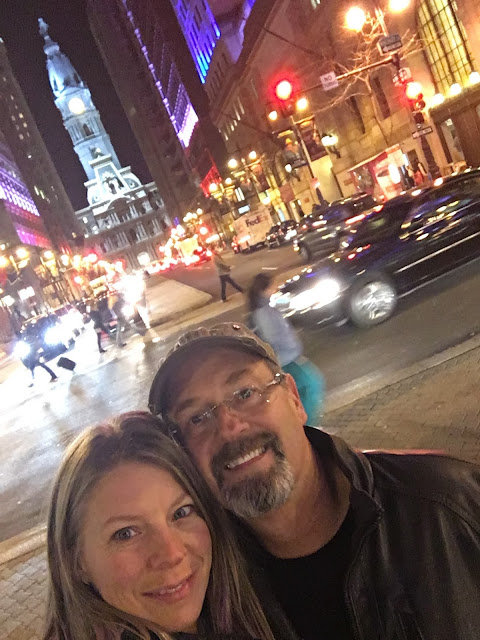 Saturday I dragged My Musician out early to go watch the 8k.  Then we wandered around the city some more. I probably walked too much this weekend but we couldn't ignore the city around us. 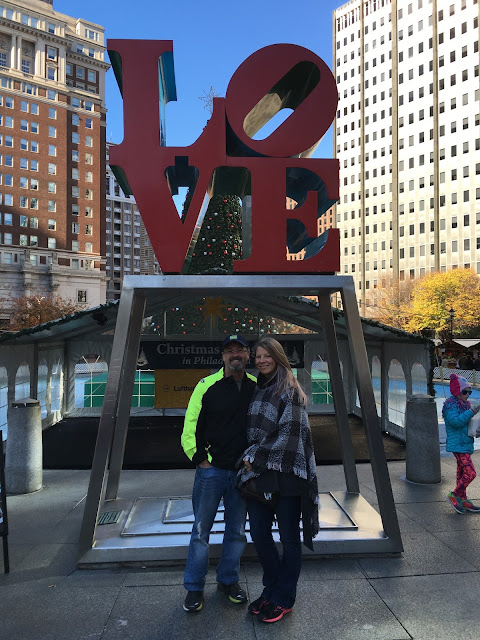 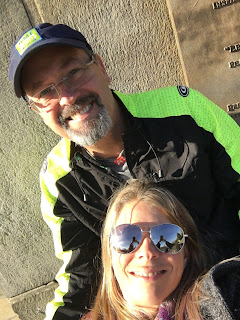 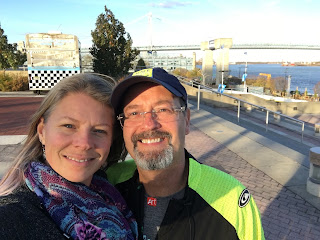 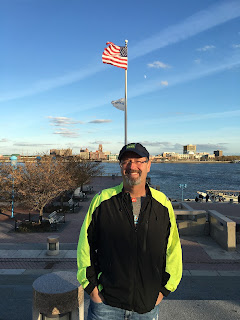 So after two days of wandering around Philly, it was time to get everything set for morning and get to bed early.

Up at 4:30 am. I had a rough night of sleep. I always do before a race. I chugged my coffee, ate my cliff bar and started to get ready.  I filled my water bottles, put my pancakes and back up Huma in my fuel belt. Right after I finished filling my hydration bottles with my coconut water and pineapple juice  mix (this is my "Gatorade"), the mason jar slipped out of my hands and shattered in the sink.  I drink the extra after my races but I was determined not to let this rattle me.

I also started to seriously question if I should be wearing sneakers for a marathon. Everyone who knows me, knows I run in Vibrams. I wear shoes as little as possible. I'm 43 years old. The last time I ran in sneakers was a brief stint with running in my early 20's. Since I sprained my foot, I had been wearing shoes and I wore my sneakers for most of my runs while healing. I came to Philly with only my sneakers, I didn't even pack my Vibrams because I knew if I did, I'd choose to wear them over the sneakers.  Now I was really nervous about the decision but I couldn't let that rattle me either.

Security lines opened at 5am.  We could see from our room that the line was getting longer.  This started to stress me out so I finished up getting ready and chugged my smoothie.  Time goes by too fast when you're getting ready for a race and I felt like it was uncontrolably slipping away from me.

I was supposed to meet up with my fellow subbers at 6:15.  We got in line but we weren't sure My Musician was going to be allowed through at that check point. We heard the police saying that only runners were allowed at this check point.  Dang.  Ok. I was determined not to let this rattle me either!  You see, he's my calming force before a race. He keeps me focused on my strategy instead of letting my mind wanted over all the "What If's".

Right after I got through the security check point, the woman behind me started chatting. I was so grateful because even though I was trying to stay calm, I was far from it!

It was fun seeing some Subber faces I already met in October (yes that race report will come eventually) and it was great to meet some I only knew virtually! 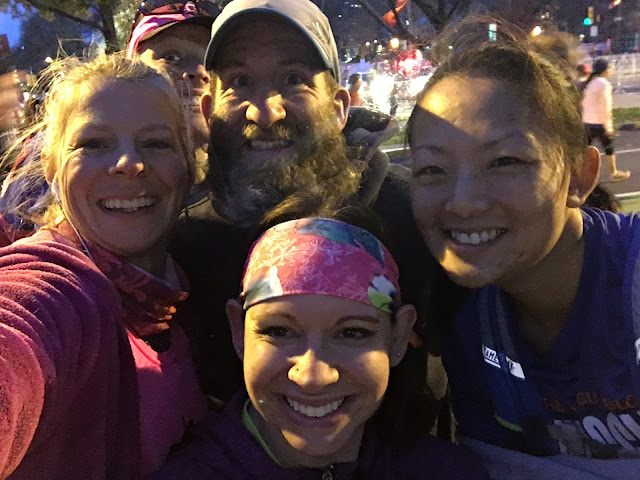 Since I must pee a million times before a race, I took off for the very, very long line of the porta potties!  I was pretty overwhelmed feeling by the amount of people there. This was the first race I'd run of this size. I loved hearing all the different languages around me and all the chatter as I waited. It helped to distract me and calm me a bit.

After getting tangled up in the wrong corral, I was able to finally get across it and find my corral. I knew there was other Subbers in my corral but it was so big I didn't even try to find anyone.  Then I happened to see the Spartan King! It was nice to chat with him a bit to take my mind off of my nervousness.  I was also texting with My Musician and found out he decided not to try to get in but would be waiting at mile one, then around mile 6 and then would make his way back to finish area before I finished.  I couldn't wait to see him on the course. 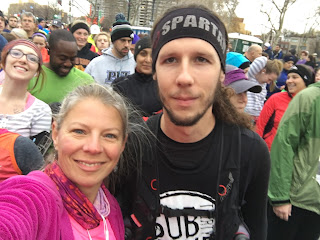 There were speakers everywhere so I was able to clearly hear the Anthem sung, hear the start of the wheelchair racers and the first corral.  It took 20 minutes to get to the start line.  I was so happy to finally cross the line but the congestion didn't get any better.  I really had to watch where I was putting my feet so I didn't set on anyone.

I'd been voice texting with My Musician while I was running, trying to workout where he'd be on the course.  I really had to pee again and I wasn't seeing any porta poties.  I thought I was going to burst.  When I did finally see a porta potty, I stopped and stood there for at least 30 seconds, which is forever when you're watching people run by you, and gave up and kept running. Between miles 5-6 we went down a side road, that I finally snuck between two cars. It's one of the perks of growing up and living in the country, you learn how to pee on the fly!!!

Shortly after that I saw My Musician. Between the amount of runners and spectators I almost missed seeing him. Then during mile 7 I saw my friend T.S. (when I get my October blog post done, you'll hear more about her - and later in this post!!) I love seeing those I know and love on the race course. 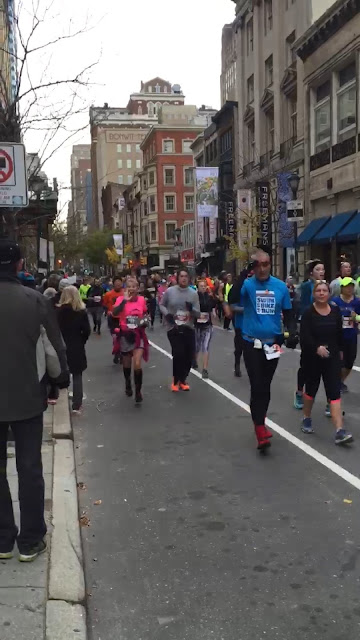 There was some hills in this race course but none of them were very bad compared to the hills I run daily at home.  I was glad they weren't nearly as bad as I thought they might be.


About mile 10 my foot (which I had sprained in October) started to hurt.  By mile 13, I was seriously contemplating doing just the half marathon.  My foot hurt, I was running on it funny to avoid the pain, which then made my other hip ache!!

Then I remember the picture I saw of the medal and I knew that no matter what I had to endure through the next 13.1 miles to collect that baby.

The last 13.1 was really a blur.  The second half is an out and back and normally I find it energizing to have those in the lead running past me but it mentally ticked me in the teeth. I had just passed the half way point and the leaders were coming in to the finish line.  I still just wanted to stop and not finish the race.

Every mile, I'd walk for about a minute or so to try to rest my foot. Then I start running again. Each time I stopped, it got harder to get running again.  I never thought that the turn around point was going to come. A few times I just wanted to sit down and cry.

Then it was finally there. The turn around. Now it was time to head to the finish line.  I hit mile 20 and thought, only 6 miles left, no problem you can do that.  I had to stop at mile 21 to use the porta pottie again. Someday I'll get my system to behave!  Then I started running and kept running. I was moving as a much slower pace that I had trained for and planned but I was guess I'd come in right around 5 hours.  I was exhausted and my foot hurt, I was slowing down more than I wanted to.

Then I saw her.

What a beautiful sight.  I ran up to hug her and she yelled at me to keep running and fell right in step with me.  I can't remember exactly where but I think it was around mile 24. She helped me to pick my pace up by over a minute a mile.  She ran with me until the middle of mile 25 then went to run with and encourage some others that were farther back.  She really helped me get my pace back up so I could finish in under 5 hours.

I hit mile 26 and had to fight back the tears.  I started running as hard as my foot would let me.  I keep looking for My Musician and then there he was as I was coming down the chute. That started the tears. I could not wait to hug him. 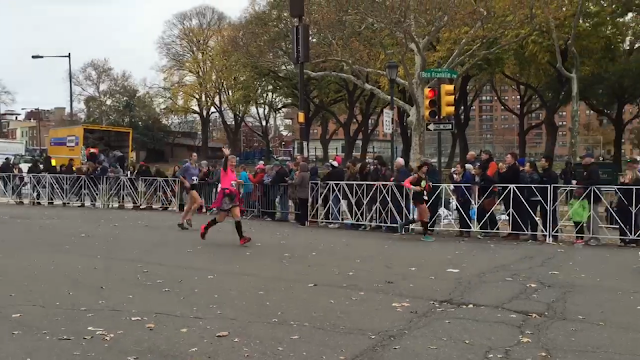 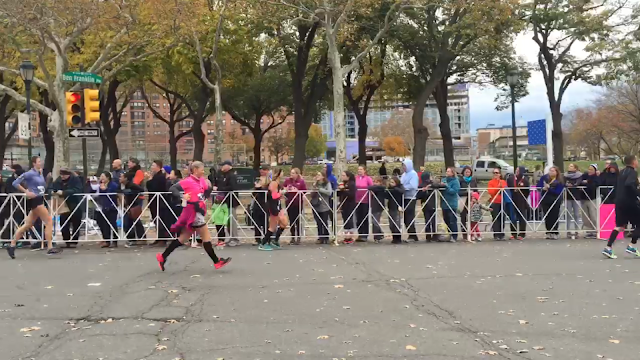 I crossed the finish line in 4 hours and 58 minutes.  Just under my "C" goal but I was happy to just finish my 2nd marathon. 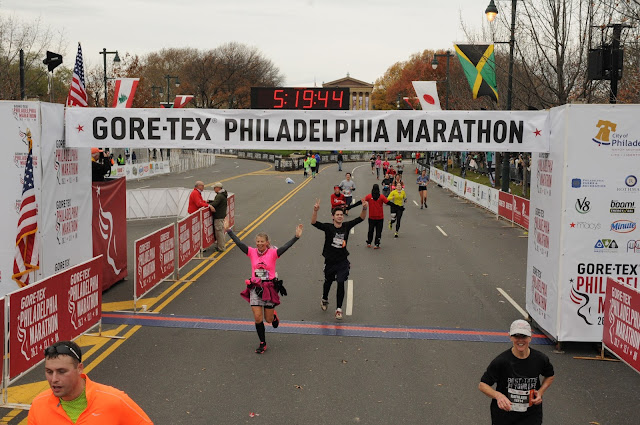 I bent over and and stated crying.  I freaked out one of the volunteers because she came over to make sure I was ok.  I was so overwhelmed that I finished, that I took almost an hour off my marathon time and I was going to get such an incredible medal to remember this race and beautiful city by.

I called My Musician, lined up where we were meeting and then called my Bestie.  First words out of her mouth, "Well, did you sh*t yourself?"  God, I love that girl.  Then she cried with me and told me how proud she was.  I called the rest of my family waiting at home to let them know I finished and I survived!! I'm so incredibly blessed by the support system I have.

As we were walking back to the hotel, all you could hear was the ringing of thousands of mini Liberty Bells. It was such a beautiful sound to carry away from the race. 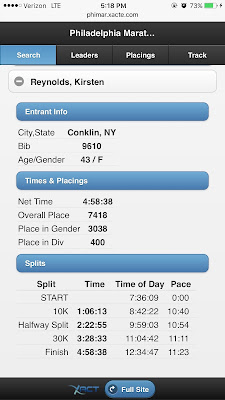